I was going to try to post some of my older comics or maybe I should say re-post some of the more popular ones here but I am having difficulty uploading them from my computer. It seems like this site has become more complicated than I can handle so I will be posting everything on my other two sites from now on.
They are
http://bolumpkin.wordpress.com
and
http://gatorhead.wordpress.com

Please visit these sites for my latest posts.  Thank you for stopping by.
Posted by Bo Lumpkin at 2:46 PM No comments:

Hi, I'm Bo Lumpkin and I've been thinkin'.
I reckon we are a lot of things in America and wasteful is sure one of them.
Leonard was tellin' me about bein' homeless and how he learned to get enough food to eat that folks throwed away to keep him from gettin' hungry.
"When I said I get eight dollars an hour and all I can eat for workin' for the city I was jokin' a little but folks sure do throw away some pretty good stuff."
I had noticed already that Leonard was dressed pretty good and had on a nice pair of cowboy boots.  He commenced to tell me about how he accumulated stuff, " Everything I have on was throwed away by somebody.  I ain't had to buy no furniture for my apartment since I got one and I ain't had to buy no clothes.  I even got some right pretty decorations in my place too."
I was kind of squeamish about usin' stuff he got out of the trash and I said, "Ain't that stuff kind of dirty?"
He just smiled and said, "Sometimes...but soap is still pretty cheap compared to clothes and furniture."
I reckon Leonard might have just had a point.  I reckon he convinced me enough that I told him if he run across another pair of boots like his in a size 11 that I might just be interested.
I'm Bo Lumpkin and I've been thinkin'.  I reckon one man's trash is still another man's treasure, especially when you work on a garbage truck and you get first choice at it.
Posted by Bo Lumpkin at 12:30 AM 3 comments:

Hi, I'm Bo Lumpkin and I've been thinkin'.
I've been telling y'all about Leonard Gilmore and his adventures in the city as a garbage collector. He really had some yarns to tell.  When we first started talking he mentioned bein' homeless and I  asked him about it.
"Well, when I first got to the city I went to work as a bouncer in one of them exclusive night clubs where they don't let just anybody in."
I didn't doubt that none since Leonard had always been a big old boy who didn't mind a scrap one bit. He went on with his story, "Well, I was mindin' the door one night when this guy wanted in and didn't have no pass. I told him he couldn't get in and he ups and kicks me in the chest and walks on in. He bowed to the crowd of folks and said,' Kung Fu from China,' and the whole crowd laughed."
"I just straightened up and went back to mindin' the door and the same thing happened later with another feller only he bowed to the folks and said,' That's Karate from Korea,' and they all laughed again."
It seems like this was startin' a trend because then a little fellow just walks up, grabs my wrist, and throws me to the ground. He bowed to them clubbers and said," That's Judo from Japan,' and they all laughed again."
"Well by then I'd done got plumb fed up so I got another feller to relieve me at the door and I went to my truck to get a little help. When I went inside all three of them fellers was sittin' at the bar just laughin' and jokin' and high fivin' each other and just havin' a big old time. I walked up behind them and about the time they looked up and saw me in the mirror-blap-blap-blap- and all three of them hit the floor and layed there in a pile. I might not have got fired if I hadn't turned to the crowd and bowed and said, 'Lug Wrench from Ace Hardware."
Well, I'm Bo Lumpkin and I've been thinkin'" I know Judo, Jujitsu, Karate, and a few other foreign words but there just ain't no substitute for a good tire tool. Whatchall been thinkin'?
﻿
Posted by Bo Lumpkin at 12:30 AM No comments:

Hi, I'm Bo Lumpkin and I've been thinkin'.
I told y'all I'd share some more of Leonard Gilmore's adventures as a Sanitation Engineer
(garbage collector) in the big city.
Leonard was downright enthusiastic about his job. I was downright impressed that he was so career oriented considerin' the way he used to be. He lit right in to telling me all about his job.
"Heck Mister Bo, I found out that us collectors know more about folks secrets than the FBI or the CIA." He had aroused my interest so I asked him what he meant.
"Well, fer instance," he said," There is a widder woman on our route who kind of turns up her nose kind of persnickety like at everybody and especially at me and the boys on the truck. We used to be intimidated by her but not any more."
I asked him why he wasn't still intimidated. He had a kind of silly grin on his face," We took a good look through her cans and found out she goes through three or four of them grown up diapers everyday... and we ain't about to be intimidated by a prissy woman who can't hold her own water."
I'm Bo bumpkin and I've been thinkin'. I'm gonna be a whole lot more careful about what I throw in the garbage can from now on. Whatchall been thinkin'? Leave me a comment or send me an
email. I've got a few more stories Leonard shared with me.
Posted by Bo Lumpkin at 12:30 AM 7 comments:

I've been thinkin' about the economy just like everyone else. The jobless rate is terrible so I reckon it's good to have any kind of job.

I was down at the Grab-Sum-Grub drinkin' a YooHoo when Leonard Gilmore came in. We hadn't seen each other in awhile so he sat down to chat and said he was on vacation. Leonard was one of them young folks who couldn't wait to get out of Gatorhead and head for the big city. He was really gonna set the world on fire but I reckon his matches was wet..

When I asked him what he was on vacation from he said he was workin' for the city as a garbage collector. I don't look down on nobody's job as long as it's honest and moral so I asked him how it was going. He answered," Purty good I  reckon, he answered. "It pays 8 dollars an hour and all your can eat."

I admit I was a little shocked at that answer until he continued," Yea, I was homeless until I got that that job and I learned a lot livin' on the streets."

He then commenced to tell me about some of the other benefits of being a "Sanitation Engineer" that I hadn't ever thought about.

Y'all come back  tomorrow for more insight into his new vocation.
Be sure and share this with your friends. There is plenty of Gatorhead to go around for everybody. 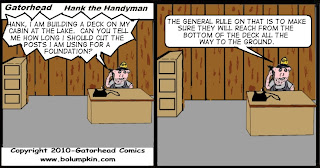 Some of the links that others have provided will be directed to this site which is almost inactive at the present time. My main site is
www.gatorhead.wordpress.com
my secondary blog site is
www.bolumpkin.wordpress.com
Thanks for visiting. I really appreciate it.

Posted by Bo Lumpkin at 6:58 AM No comments:

Some of the links that others have provided will be directed to this site which is almost inactive at the present time.  My main site is
www.gatorhead.wordpress.com
my secondary blog site is
www.bolumpkin.wordpress.com
Thanks for visiting.  I really appreciate it.
Posted by Bo Lumpkin at 5:18 PM No comments: 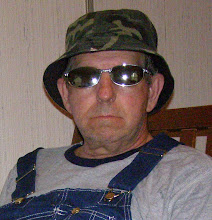